To fully enjoy your PlusCart you need to perform 2 steps:

Since firmware version v0.14.2 there are three options available to connect the PlusCart to a local WiFi network:

Connect to the PlusStore and create a "My ROMs" space

Insert your email address, or your PlusStore username, at the menu entry (Setup -> Plus connect).

If an PlusStore account already exists with this email, an "confirmation" email for the connect will be send.

either way check your emails and confirm or finish your registration.

To exit a game just press and hold first Joystick to the right (or press Paddle button) and press Reset on the console. The exit function should work with every game, that is reading Joystick/Paddle-button and the console-switches in a kernel loop. Some (classic) games read the joystick only in the game loop and not at the title screen, so you have to start the game before you can use the exit function.

The menu entry "** Update **" indicates that a new firmware is available in the PlusStore. Selecting this entry will start the FOTA (firmware over the air) update.

The update was successfull if you see a menu list with "Testing xx" entries, then restart your VCS (since version v0.13.6 no restart is necessary).

The actual firmware version can be seen in the "Setup" menu header. 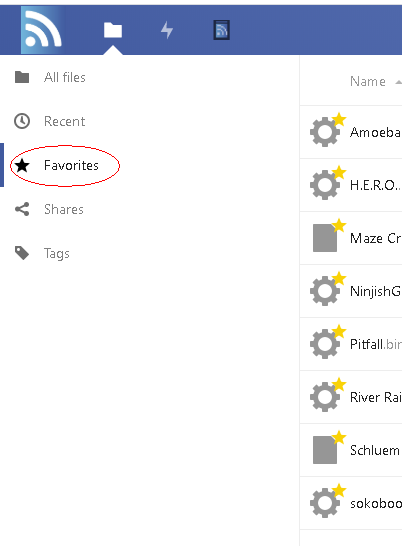 The "Popular ROMs" folder contains the 11 most downloaded ROMs of the last 4 weeks from the "Public ROMs" area.

Offline ROMs can be uploaded to the PlusCart's flash memory. The ROMs have to be packed into a standard TAR archive. The requirements for that TAR archive are:

There are two options available to flash the TAR archive to the PlusCart:

With both options the previously flashed offline ROMs will be deleted!

Upload a file that starts with "Autostart." to your nextcloud "Offline" folder and then select "Setup" -> "Download offline ROMs" at the PlusCart menu.

The autostart file can also be flashed with the STM32CubeProgrammer ( see Offline ROMs ).

You don't have to put your ROM files into the My ROMs folder, if you use the root folder the ROMs will be the first in the PlusCart start menu